Thank you for checking in to see how things are going with our Anniversary Program Planning Group. Please share this information with everyone you know by forwarding the update to members on your mailing list and encourage others to sign up for our Program Updates. 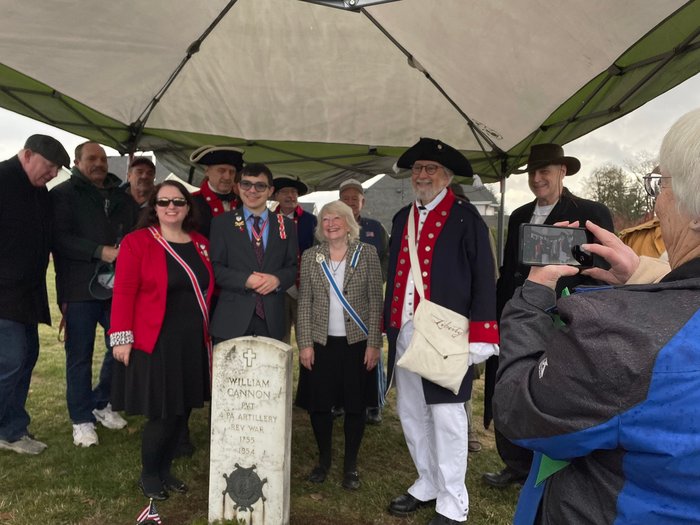 Every year the Oregon Society Sons of the American Revolution Color Guard honors the only Revolutionary War Patriot buried in Oregon, Washington, and Alaska by laying a wreath from the Wreath Across America program on his grave in St. Paul’s Cemetery.

This year, in preparation for the National 250th Anniversary Celebration of the founding of America in 2026, we expanded our ceremony.

It started at 1:30pm on Sunday, December 18 at the grave of William Cannon. We began with the Presentation of the Colors by the Oregon SAR Honor Color Guard who were joined this year by members of the DAR and CAR. Speakers included the Oregon State SAR State President Michael Tieman, Oregon DAR State Regent Nancy Slagle, Oregon CAR State President Joseph Martin, and CAR Senior State President Cory Martin. We then laid a wreath at William Cannon’s grave followed by reciting the America’s Creed, and the Retirement of the Colors.

William Cannon was born in 1755 in either Virginia or Pennsylvania, in that part of Pennsylvania that was claimed by both states.

He served as a private in the in the 4th Regt. Artillery, Pennsylvania Regiment, Continental Line. A veteran of the battles of King’s Mountain and Cowpens and is the only Revolutionary War Veteran buried in Oregon, Washington, and Alaska. He appears on a list of non-commissioned officers and enlisted men who had service with the regiment at some time during the period February 6, 1777-November 3, 1783.

Cannon was serving as a soldier at Fort Mackinaw, located on an island at the confluence of Lakes Michigan and Huron, when in 1810 Wilson Hunt came seeking volunteers for an expedition to Oregon on behalf of the company that had been formed by John Jacob Astor to establish an American fur trading post on the Columbia River. The company was formed with two divisions, one to proceed by ship and the other to go overland under the leadership of Hunt. The men would enlist for a three to five years’ service.

This was only the second time that an attempt had been made to cross the continent.

Trying to follow the route of Lewis & Clark, the expedition kept to the streams as far as possible. Finally they arrived in Astoria, Oregon in 1811, and founded the first American settlement.

In 1828 he was with a party sent out by the Hudson’s Bay Company to trap in a new territory to the south. Cannon was the first blacksmith at Ft. Vancouver and was working there as blacksmith and millwright in 1846. He is credited with building not only the first gristmill in the area, but during the period 1833 and 1839 was associated with the construction of several grist and sawmills in the region.

In 1839 Cannon signed the petition to Congress submitted by Jason Lee and became a Justice of the Peace for the local government in the Willamette Valley in 1841.

In 1843 he was present at the Lyceum Debating Society in Oregon City when George Abernathy spoke on the need of the settlers to establish an independent government favoring the United States instead of Great Britain.

He was one of the 52 men who voted in favor of a provisional government at the famous meeting at Champoeg, Oregon on May 2, 1843, at the age of 88 years old.

A Revolutionary War Patriot Headstone Placing Ceremony sponsored and organized by the Oregon Society of the Sons of the American Revolution was held on April 12, 2003, over his gravesite.

About the America250 SAR Committee

The America 250 SAR Committee works at the national, state, and local levels to promote the commemoration of the 250th Anniversary of the American Revolution and the formation of the United States. It develops educational programs, maintains a list of events, publishes articles and booklets, and publicizes the anniversary through media, education, and government contacts. The committee also helps the International Sons of the American Revolution Societies of Canada, France, Germany, Mexico, Spain, Switzerland, and the United Kingdom in planning their special celebrations. 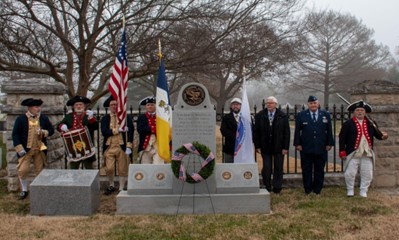 Pearl Harbor Day, December 7th, 1941, was recently celebrated by members of the Ozark Mountain Chapter in Springfield, Missouri. This chapter has maintained a solemn vigil at the Pearl Harbor Memorial in the Springfield National Cemetery for many years. This is one of the most important dates in our more current history, because it brought us into WWII and our Compatriots muster on this site each year to hear the story of those 2,400 men who lost their lives and 1,200 others who were injured in just 90 minutes as four battleships, three cruisers, three destroyers and several other smaller ships along with the destruction of most aircraft that were assembled. We were awakened from our slumber as we were forced to enter the greatest of wars with millions of men and women put in harm’s way to protect what our Patriot Ancestors had given so much to establish. Pearl Harbor Day is an important milestone in the history of America, and I hope that you will plan appropriate ceremonies for 2023 and beyond.

SAR States and Chapters have been actively working to establish 250th Anniversary events within their communities. We have enjoyed receiving your photos and event outlines and I encourage you to continue your efforts to engage other organizations, such as the DAR, CAR, Scouts, Veterans organizations, etc. in everything you do. Keep up the good work!

250th Anniversary Medals and Awards are an important part of our program, so we applaud everyone’s efforts to spread the word of the 250th Anniversary through participation in public events that celebrate our Patriot Ancestors, battles, and events. Remember that the 250th Anniversary medals can also be presented to DAR and CAR members, Scouts, and other community partners for significant service to the SAR, based on the same point schedule as used by members.

The ten states in number of approved applications are as follows:

250th Anniversary Gold Medals have also been approved for the following states:

Check page 15 in the Toolkit to set up your own medal program.

Congratulations to our SAR Chapters and the State Societies who have begun work to document their 250th Anniversary events and are earning the Bronze, Silver, and Gold medals.

SAR National currently has an excellent 250th Anniversary Pinavailable for use as a commemorative item or award. These pins are available on the america250sar.org website.

Youth Protection Training has been a requirement for three years so many of you may be reaching your anniversary date. Please check your renewal date and renew your training certification at your earliest convenience. While we continue to work with youth during this time of many community activities it is important that every participant have their current Youth Protection Certification.

The Eagle Scout Committee has been focused on developing 250th Anniversary Programs for Scouting organizations across the country. As it becomes more and more difficult for SAR members to access students within school, Scouting becomes a very important link to youth through programs developed for our Compatriots to share with the Scouting community.

Scouting Programs now have their own tab, due to their importance to our Compatriots. I continue to hear from our members who ask for additional support for Scouting programs. Scouting Youth Protection is now available as a direct link on our website, because of member requests. We already have the SAR Youth Protection on this website for ease of compliance with the youth protection required when working with the Scouting community.

The Scouting tab has been updated for SAR Compatriots whose units work with Scouts will find several new additions to this update. The Scouting Program tab list proposed new Scouting programs that will be available through the 250th Anniversary and beyond. The first two Scouting programs focus on outdoor activities.

This program consists of several Scouting activities that can be executed in a day camp, resident camp or other circumstances under the direction of SAR members with the support of Scout leaders. These events can take place at any time although the sequence of annual ceremony recommendations is shown below:

The Boston Tea Party and Lexington and Concord Camporee Programs are included in this update.

Please send stories and photos of your programs so that we might share them with our Compatriots across America and find more and better ways to celebrate our 250th Anniversary.

Our Partners section discusses some ways we can combine our resources with the DAR and the CAR to make the 250th celebration a big hit. The Oregon SAR has spent a lot of time working with these sister organizations on combined programs. So far this year they have set up three events in Nov/Dec. There is the Veterans Day parade where we all march together as a group, the SAR Color Guard taking the lead; the Wreaths Across America Program again this year with the SAR Color Guard doing a musket volley and laying wreaths at specific graves with the help of the local DAR and CAR chapters; and a wreath laying ceremony at the grave of the only Revolutionary War soldier buried in Oregon and Washington which will include the State DAR Regent, State CAR officers and the State SAR officers, State Color Guard and members from all chapters. Next year we have even more plans to work together on programs for the public.

Please send stories and photos of your programs so that we might share them with our Compatriots across America and find more and better ways to celebrate our 250th Anniversary.

Be sure to add all your SAR Chapter and State Compatriots to our mailing list so that they can receive our Program Updates.

Reproduced for the California SAR America 250 Site at CaliforniaSAR.org/America-250